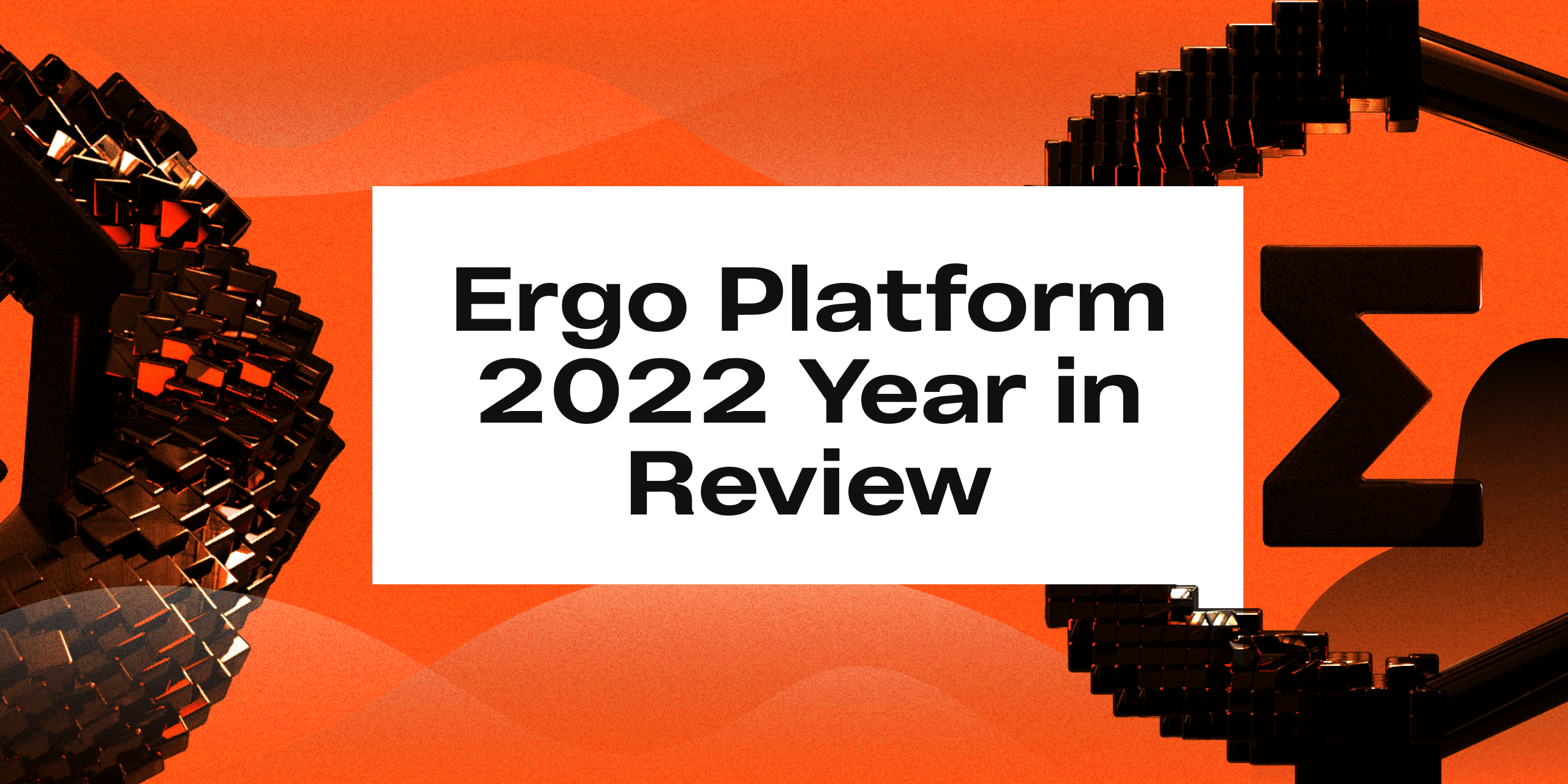 What a year it has been for the blockchain industry. Many may look back on this year as a down year for the cryptocurrency sector, but for Ergonauts, it can be argued that 2022 was one of the best years yet. Turning only three years old this year, the Ergo Platform has already reached new highs in developer activity. Let’s take a look back at some of Ergo’s more notable memories from this last year.

EIP-27 was proposed as a measure to ensure the crypto-economic security of Ergo’s long term viability. Because the original $ERG emission schedule was set to be completed within eight years of the mainnet launch, there was a concern that this did not leave enough time for the proper development of the Ergo ecosystem. How would the mining protocol be incentivized if block rewards ended before the network could reach a sustainable, critical mass of regular transactions? Ergo’s founder and core developer, Alex Chepurnoy, proposed a restructuring of the emission schedule such that a portion of the $ERG from each block would be transferred to a future emission contract. This reallocation of mining rewards ensures that the network will enjoy steady block rewards until approximately 2045. At which point, the blockchain’s daily transactions and Storage Rent feature should offer sufficient rewards for miners. For an overview of EIP-27 and the restructured emission schedule, please read the Ergo Foundation’s publication entitled, A New Era for Ergo: EIP 27 Begins Today.

When Ethereum switched from Proof of Work to Proof of Stake this year, those who had been mining $ETH were suddenly looking for a new blockchain to mine. The Ergo Platform saw an impressive spike in hashrate (15Th/s up to 400Th/s at one point), such that it significantly increased block difficulty and greatly diminished mining rewards. In order to re-establish steady block time production and mining rewards, EIP-37 was introduced to the mining community. The proposal shortened the time between epochs, while limiting any difficulty change to no more than 50% per epoch. For a deeper look at EIP-37 and the Ethereum Merge, please see Ergo: After the Ethereum Merge.

Recently, the Ergo blockchain received a significant network upgrade with the implementation of Reference Client 5.0. Prior to this new reference client, Ergo’s transaction costing was determined by AOT (Ahead-of-Time) costing. With Reference Client 5.0, the network now employs a hybrid costing method using AOT costing and JIT (Just-in-time) costing. “Users and developers will enjoy faster script executions, and space within blocks will be used much more efficiently. With faster script execution, the network will enjoy even more increased transaction rates. With improved costing, blocks will also be able to include even more transactions, thereby increasing throughput.”

One of the greatest features of the Ergo Platform is the community involvement. The Ergo Manifesto is an inspired document that strives to lay out the goals and vision for the blockchain. A strong sense of community is integral to the ethos of that Manifesto. The ErgoVersary, Ergo Summits and ErgoHacks are a celebration of that combined desire to build and develop a blockchain for the average person. In the year of Ergo’s Third ErgoVersary, the Ergo Foundation also hosted two Ergo Summits (on the topics of DeFi and Privacy) and three ErgoHacks (the community hackathons). The 2022 ErgoHacks featured several large prizes for participants, with each ErgoHack focused on developing specific projects: Mining and Minting, DeFi use cases, and Privacy & Security.

New exchange listings continue to be a high priority for the Ergo Foundations activities. In 2022, Ergo was added to three new exchanges: Indodax, Huobi, and Bitrue.

In 2022, Ergonauts went from having almost no viable wallets to several excellent options to safely secure their Ergo assets. Captain Nemo led the way at the beginning of the year with Nautilus Wallet, creating an efficient browser extension wallet that allowed for smooth and seamless dApp interaction. In addition to Nautilus Wallet, Ergonauts can now also choose from Satergo, SafeW, and Minotaur Wallet. Recently, Minotaur has introduced new functionality to the wallet and created Ergo’s first multi-signature wallet.

In the fall of 2022, the team behind Flux cryptocurrency added Ergo support to their Zelcore wallet. In doing so, Flux also integrated Ergo as a Flux Parallel Asset on the network. For more information on this, please read Zelcore Wallet Officially Adds Ergo Token Support.

Cross chain bridges are an incredibly important aspect of blockchain technology. They enable users to swap tokens with other blockchains and have the potential to promote increased adoption between various chains. In the last couple of years, there has been a concern however that bridges can present weak access points for bad actors to attack the system.

With this in mind, Ergo developer and Foundation Board Member, Mohammad Hasan Samadani (MHS), undertook the task of building the Rosen Bridge. This bridge is built to be Ergo-centric, such that all of the smart contracts and consensus will be performed on the Ergo blockchain. This revolutionary technology will be an important feature of the Ergo ecosystem going forward. When one considers all of the bridge exploits that have occurred over the last couple of years, it is important to make sure that new bridges offer strong security guarantees. With Rosen Bridge, the security of Ergo protects and ensures the safety of bridge transactions. For more information on Rosen Bridge, please see the March 29, 2022 Developer Update.

Around the time of the Ethereum Merge, f2pool announced that they would be offering Ergo mining support to their miners. As one of the largest mining pool operators in the industry, this news signaled that the mining industry saw the potential of Ergo’s Proof of Work network going forward. At the time of the announcement, f2pool released the following statement: “f2pool supports Ergo’s movement as a PoW smart contract platform that ensures the economic freedom of ordinary people.”

Among the numerous innovations the Ergo Platform has enjoyed this last year, Babel fees offered new ways for Ergonauts to transact on the network. With Babel fees, users no longer have to use only $ERG to cover transaction fees. If you have a wallet with Ergo native assets, you can simply select that asset to cover a transaction fee. For a guide on how to use this feature, please read Babel Fees on Ergo: How-To Guide.

A New Look for Ergo

Ergo got a brand new look! Under the guidance of Foundation Board member and Community Manager, Mark Glasgow, the Ergo Platform underwent a rebranding, culminating in a new and more modern website design. Boosting a much improved user experience, the new website also offers a wealth of information on how to get started with Ergo.

The developer forges have burned bright at Ergo this last year and developer activity shows no signs of slowing down. Thank you to the Ergo community for all the work you do! This is your blockchain and it is evident that the community takes pride and ownership for what is being built.

Happy Holidays, Merry Christmas and Happy New Year! Let’s keep building and see how much we can accomplish together in 2023.