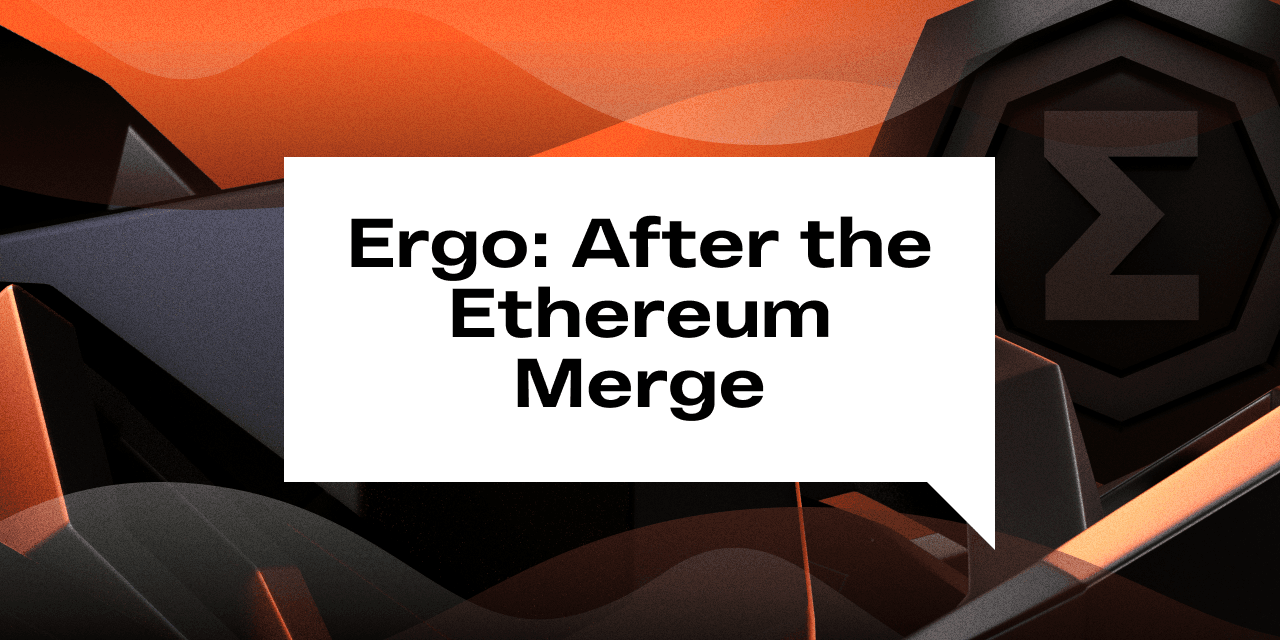 A Discussion for the Mining Community

It has been a whirlwind couple of weeks for the crypto mining industry. With Ethereum’s transition to Proof of Stake, over 800Th/s mining power started to look for a new network that their hardware could mine. What ensued could be compared to a feeding frenzy of activity on several Proof of Work blockchains as Ethereum miners joined or tested out new mining communities. In the days after the ETH merge, Ergo’s network hashrate rose from approximately 15Th/s to over 400Th/s at one point. Currently, the network hashrate is holding steady around 27Th/s. So, what happened? Why such a large jump and sudden drop?

In this article, we will dive into why the network hashrate has fluctuated so greatly and what options miners have going forward - it’s important to observe that being a miner on Ergo comes with the ability to propose and vote on changes to the network. If you are a new miner, or recently attempted to mine Ergo, this article should be useful in answering some questions you may have. Before exploring those questions, let's first go over the specifics of Ergo’s supply, emission, and network participation.

The circulating supply of ERG is updated in real-time on the Ergo Explorer website.

For a complete breakdown of Ergo’s emission schedule, please see the updated information on the successful deployment of EIP27.

When the Ergo Platform launched in July 2019, the founding team of developers wanted to create a blockchain with Bitcoin’s time tested UTXO model, but with the addition of robust and efficient smart contract functionality. The goal was to create a blockchain for everyday people, not just those with large amounts of capital to invest. The inspiration for most of the technology built into Ergo is to support the mining community and allow those miners, along with new developers and investors, to guide the direction and future of the Ergo Platform. For those of you who have not yet read it, the Ergo Manifesto is one of the most important documents available to anyone interested in developing, mining, or investing in the Ergo ecosystem.

You may have heard many in the ecosystem say that the Ergo Platform was fairly launched. What does that mean? To be clear, no coins were reserved for any founders and no coins were pre-mined. Therefore, when the network launched on July 1, 2019, there were zero ERG coins in existence until they were mined. For the first 2.5 years after launch, the mining protocol sent a small portion of mining rewards to the non-profit Ergo Foundation so that the entity could assist with promoting and growing the Ergo Platform to prospective developers. When observed within the context of the total supply of ERG coins, the Ergo Foundation’s operational budget amounts to only 4.43% of the total supply. The team took as conservative of an approach as they could for this aspect of the protocol, and the amount of money is quite small when compared to the venture capital fundraising efforts of less decentralized blockchains.

Miner Governance: Your Power to Participate in Network Changes

Ergo is designed with the goal of being overseen and controlled by the community as a whole. The Ergo Foundation serves only to continue to find ways to further decentralize Ergo and the decision making process for the blockchain. Ultimately, the future of Ergo should be run by the community, where any network changes are proposed, and voted on, by the miners.

When the ETH merge occurred, the Ergo network saw a massive influx of new miners. This sudden and steep rise in network hashrate greatly increased the network difficulty for producing blocks. As a result, mining rewards significantly declined and many miners were left with a scenario that became less profitable. The real problem arose when large mining farms left Ergo and the network difficulty did not drop proportionally. Steady miners were left with large block times and lower rewards even though the network hashrate had dropped. The reason this happened is because of a security feature of the mining protocol. In an effort to prevent large miners from dropping in and out of the Ergo network, block time difficulty was designed to only readjust at the start of the next epoch. Although this was meant to protect the protocol, this had an adverse effect on those who consistently mine Ergo.

As has been stated, the mining community has the ability to propose and vote on changes to the Ergo network. EIP27 is one such success story of the potential for Ergo’s ability to enact changes through the mining community. The Ergo Foundation is sympathetic to the issues that have arisen from the recent hashrate volatility and has already put forth a proposal to the mining community for consideration. EIP37 is a proposal to shorten the time between epochs, while limiting any difficulty change to no more than 50% per epoch. All members of the Ergo ecosystem (especially miners) are encouraged to review this proposal.

This is the Ergo Foundation’s first response to this immediate situation. However, the mining community is strongly encouraged to participate in this discussion and to make proposals to any changes they would like to see. Ergo is designed for you to participate in these discussions and have these proposals voted on by fellow miners. The Ergo Platform is building a blockchain for the future and as it progresses, there will be growing pains. The good news is that your voice matters and we can work together to build a blockchain for everyone. Join the conversation today and make your voice heard.