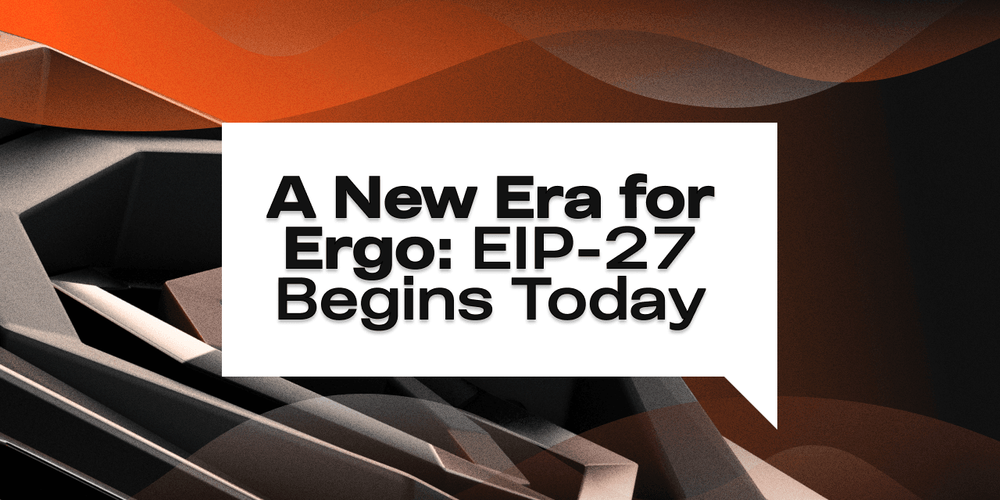 Today marks an incredibly important milestone for the Ergo network and ecosystem. Nearly six months ago, core developer, Alex Chepurnoy, proposed an adjustment to the emission schedule of ERG. The reason for this was to extend the mining rewards beyond the original eight year schedule. In doing so, it would allow for more time to effectively develop the necessary crypto-economic security for the long-term sustainability of the blockchain.

The original emission schedule was set to release 75 ERG/block for the first two years. After two years, the emission rate was set to decrease by 3 ERG, with an additional reduction of 3 ERG/block every three months. That schedule would have depleted the mining rewards after approximately eight years. The network would then rely on transaction fees and Storage Rent to compensate miners.

With EIP-27, the emission curve is extended by about 17.38 years. The plan alters the amount of the block rewards so that a portion of the supply is put into a remission contract that will release block rewards until approximately 2045.

Chepurnoy provided the following breakdown of the remission contract in an EIP-27 update on an Ergo Forum post:

EIP-27 will take effect today with block #777217. Beginning with block #777217, the amount of ERG/block will immediately decrease by 12 ERG. Given that current block rewards are 63 ERG/block, this means that new blocks will release 51 ERG/block. The original plan to continue decreasing block rewards every three months is still in place, therefore the next reduction in rewards will take place around July 2, 2022. At which time, block rewards will reduce another 3 ERG/block. This means that starting on July 2, miners will be rewarded with 48 ERG/block. Three months later, there will be another reduction of 3 ERG/block, and so on. Once the emission schedule reaches 3 ERG/block, rewards will remain steady until the depletion of the remission contract.
This change to the emission schedule is no small feat. It required a great deal of consultation with the community, especially the miners that secure the Ergo network. In order for EIP-27 to have passed, it required a supermajority vote of over 90% from the mining community.

Today is a big day, Ergonauts! Congratulations to all who have worked to make this possible! With this show of good faith by the miners, it is now up to the rest of the community to continue to build and create value in the Ergo ecosystem.