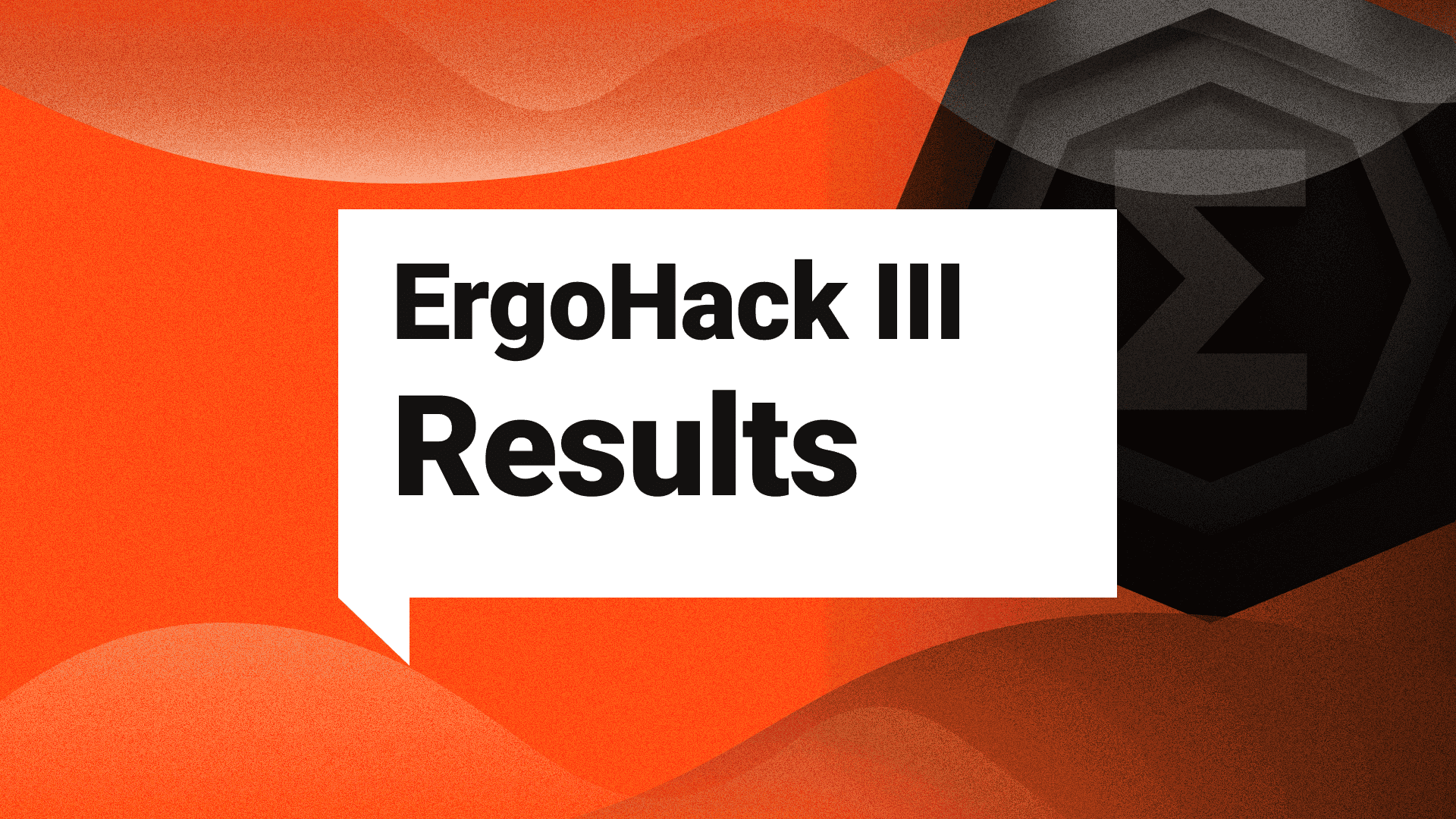 After a very successful ErgoHack III, the jury has made their final decisions! There were so many amazing projects that participated in this last hackathon and as a result it was difficult to pick the top three prize winners. With that said, the jury was able to select three teams for the top prizes.

For this hackathon, there were three main prizes as well as several special/participation awards: 10k SigUSD, 6K SigUSD and 2k SigUSD. The judges for the main prizes awarded points to each team out of a number from 1-10. The scores for each team were then tabulated to determine the winning teams. In addition to these main prizes, special prizes are being awarded from Dan Friedman (strategic advisor to Ergo Foundation), Joseph Armeanio (Business Manager, Ergo Foundation) and ErgoMixer developer, anon2020.

Based on the tabulated scores we are pleased to announce the following winners:

Stealth-addresses help to obfuscate receiving payments and are important for privacy-preserving commerce or private crowdfunding. This team's submission aligned perfectly with the theme of this recent ErgoHack III. They completed implementation of their project and this feature is now integrated within ErgoMixer.

SAFEW is a wallet that was developed during the hackathon and it is a much faster alternative to Yoroi. The team worked on Ledger integration and they made a great deal of progress, while providing good documentation. As part of their work, the team developed support for ErgoMixer and Ergo Pay implementation.

Captain Nemo (from Nautilus) has quickly become an Ergo community celebrity! They have been incredibly active and seem to have worked tirelessly to design and create an Ergo web-extension wallet. Captain Nemo was a very busy participant in the ErgoHack chatrooms during the hackathon and was often assisting other wallets and dApp teams with their development and integration. The Nautilus wallet features full dApp connectivity and will also support integration with the Ledger hardware wallet.

As was mentioned earlier, there are several other prizes to be awarded by Dan Friedman, Joseph Armeanio, and anon2020.

Dan is expected to announce his winners within the week and anon2020 is awarding the winning teams and all participants with a new token: FEMX (Future ErgoMixer Token).

In the most recent Developer Update video, Armeanio announced the following winners for his prizes:

This last ErgoHack had so much talent and it is clear the future of Ergo is looking very bright with each subsequent hackathon. These projects explored privacy and security and have added a great deal of functionality and infrastructure to the Ergo ecosystem and will continue to improve their projects long after this competition. For a complete overview of all the projects that participated in ErgoHack III, please see the following blog post: ErgoHack III Wrap-Up.

ErgoHack III was adjudicated by the following jury:

Alexander Chepurnoy, aka Kushti, is an experienced blockchain developer, speaker and educator. From 2014 to 2015, he was a core developer for the NXT blockchain and Co-Founder of smartcontract.com, now known as Chainlink. From 2016 to 2017, Alexander worked as a Lead Developer at Waves and was a Scorex Manager at IOHK while beginning his work for Ergo.

Mohammad (mhs_sam) has a PhD in computer science and over 12 years of experience in security and software development as a product owner, researcher, and team leader. He developed the ERGO mining software, Stratum server, and ergopool (smart contract based pool to bypass pool-resistancy of Autolykos v1) and became an ERGO Foundation Board Member in 2020.

Ilya Oskin is an experienced software engineer and he has been a core developer at Ergo since the launch of the project. Ilya has a degree in economics from The Russian Presidential Academy of National Economy and Public Administration. He is also the supervisor at GeekBrains, an online educational platform devoted to blockchain development. Ilya is the founder of ErgoDEX where he is currently working as the lead developer for the project.

Slesarenko is an ERGO Foundation Board Member and graduate of Applied Mathematics from Udmurt State University. He has extensive experience in software development as a team leader, architect and researcher. He worked as Team Leader at Huawei Research Lab focusing on developing languages and compilers for high-performance big data processing. Alexander is a Blockchain Core Developer and Lead Developer of ErgoScript at ERGO.

Mark is an Ergo Foundation Board member and performs several roles in Ergo. As a Computing Science graduate with a personal passion for improving inclusive systems, he is also the Technical Director for Disabled Students UK CIC - a non-profit named as one of the most influential disability-led organizations in the UK.

Bruno studied Electronics Engineering and Computer Science at Instituto Tecnológico de Aeronáutica, pursued his MSc in Computational Logic at TU-Dresden and TU-Vienna and received his PhD in Computer Science at TU-Vienna. Before joining the cryptocurrency space, Bruno was an active and accomplished researcher in the fields of Logic, Automated Reasoning and Proof Theory at Inria, TU-Vienna and Australian National University.