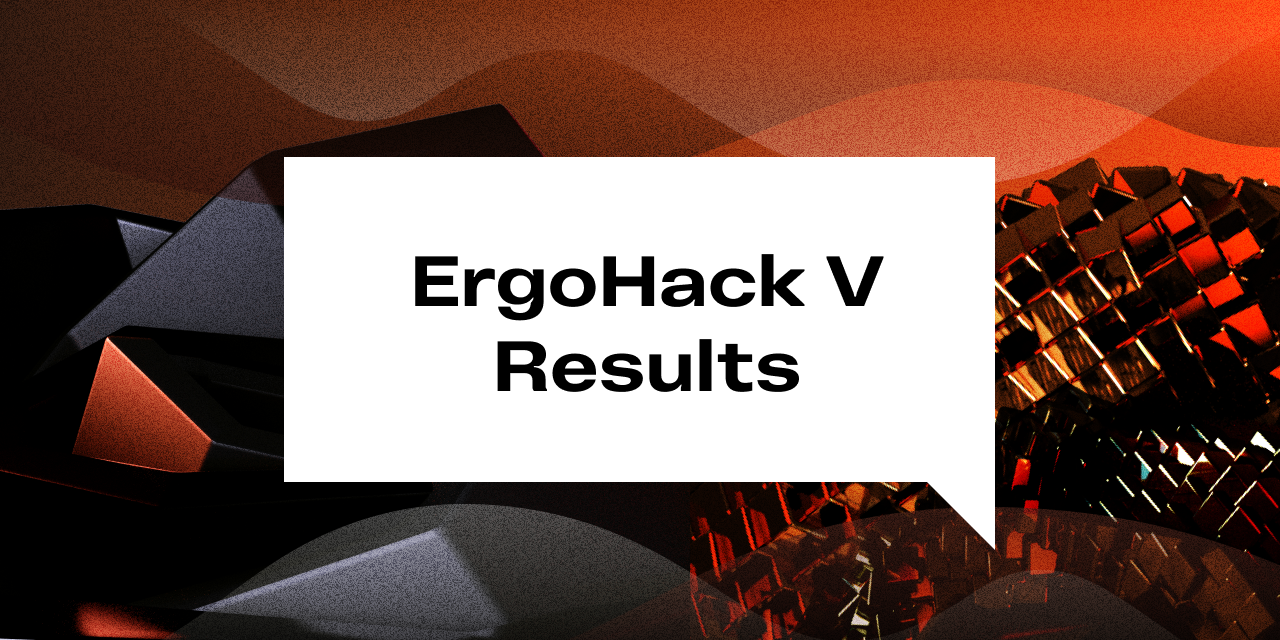 While most of the industry continues to talk about the current state of markets, the Ergo community continues to build on the innovative technology that makes the platform so unique. With ErgoHack V: Mining and Minting, participants focused on developing dApps (decentralized applications) and technology that continues to expand the utility and potential of the Ergo blockchain.

Twelve different teams/projects competed in the ErgoHack and our judges from the Ergo Foundation, Flux, Djed Alliance and Alephium have decided on the winners for this hackathon. Many of these organizations also contributed to the prizes, making the awards for this ErgoHack the largest prize pool yet.

To be eligible for the Flux prizes, participants need their project to provide solutions on the Flux network.

Alephium contributed a prize pool of 20K ALPH and it was equally distributed to all of the teams that participated in ErgoHack V.

Deciding the hackathon’s winners was a difficult task, as many of the projects submitted very impressive work. The jury judged the work of the competitors on the following criteria:

Considering these four points of adjudication, the judges have awarded the following:

CYTI is the acronym for Choose Your Token ID. The team built a ‘minable’ smart contract that will allow an entity “to mint tokens with a given character sequence at the beginning of the token ID. A token minter creates a CYTI request, and miners generate the proper token ID using the CYTI miner software. When one of the miners succeeds, [they receive] the fee from the CYTI contract and the token with the right token ID is sent to the token minter.”

The ergonames team submitted a proposal to build an Ergo Name NFT Minting Service. The purpose of this NFT service is “to register new Ergo Names and Ergo Name Resolution Service to resolve minted Ergo Names into [a] corresponding Ergo wallet address.” During the hackathon, the team developed a “strategy for a multi contract minting solution to create a single mint address.” They also completed the backend work for the project and “successfully completed a full end-to-end test.”

Paizo was working on building “an on-chain mining governance simulation tool to help educate miners on how chain governance works.” During the hackathon, they worked on on-chain governance parameters, UI options and how to “present user inputs for pool parameters.” By the end of ErgoHack V, the team had completed the “MVP of [their] project, and added epoch simulation [where] it changes the value of the parameters.”

The Obolflip project proposed building a “decentralized CoinFlip application on Ergo where users can bet on head or tail. A single-box [smart contract] will handle the state that transforms through betting - cooldown - evaluation - payout. Only one ObolFlip can run in state betting, and payout will share all amounts betted between all winners.” During the hackathon, the team designed a plan for their smart contract design and successfully implemented the user interface client.

“SNISPs are Succinct, Non-Interactive Share Proofs which will allow for accurate and efficient calculations of performed work on the blockchain. These proofs can be applied to any PoW blockchain. They should allow for the creation of decentralized mining pools with better security assumptions than alternatives like P2Pool, and better scalability than ETH based SmartPools. They may also be used for other applications which involve measuring performed work (such as direct work-based governance, work-backed assets, etc.).” During the hackathon, the snisp team completed a first draft of their research paper.

Congratulations to all of the participants of ErgoHack V! Be sure to stay tuned to Ergo’s social media channels and join us for a Mini Summit on Mining and Minting, as well as an overview of the ErgoHack V proposals from the core team. Several of the teams from this last hackathon will also be participating in the summit. They include: Ergo Audit, Paizo, EIP-38, CYTI, DumDumDum, SNISP, ErgoPayroll, and others. For a look at what each project was working on, please see the following blog post. Events are scheduled to begin on Saturday, November 26th!