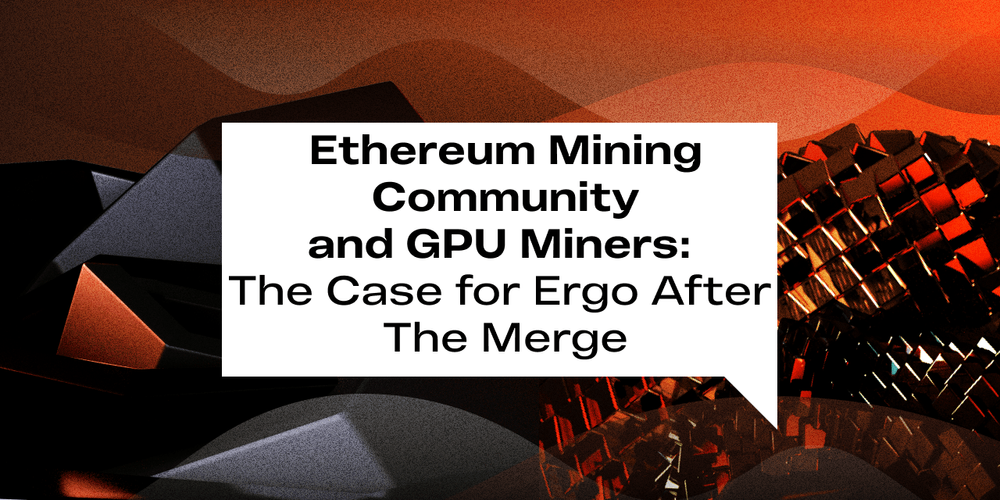 A Seismic Shift is Coming in the Field of Minable Blockchains

The Proof of Work crypto mining landscape is about to drastically change. Later this year, Ethereum has announced it will transition the network from a Proof of Work (PoW) blockchain to Proof of Stake (PoS). Ethereum and Bitcoin have long been considered the juggernauts of mineable blockchains, and Ethereum’s departure from PoW leaves many full-time and hobbyist miners looking for a network where they can direct their hash power. If you are an Ethereum miner and are looking for a network to utilize your mining resources, here are several reasons to consider Ergo.

If you are a GPU miner, your hardware will operate quite favorably on Ergo. The consensus mechanism that is deployed for maintaining the network is called Autolykos v2, and it is ASIC resistant. This means that the ASIC computers that are used to mine Bitcoin can not be used to mine Ergo (ERG). Those with gaming computers and/or dedicated GPU mining rigs can easily participate in maintaining the Ergo network while receiving mining rewards. Additionally, many who have mined both ETH and ERG often report that the Autolykos v2 consensus mechanism runs at lower temperatures on their GPU’s, putting less wear and tear on their hardware.

The Ergo Platform represents the culmination of some of the most unique advancements in recent blockchain technology. It is modeled after Bitcoin’s UTXO design, but it also features the ability to deploy robust and efficient smart contracts. The combination of these two features means that Ergo is labeled as an extended UTXO blockchain, meaning it shares the same ledger model with the Cardano network. Ergo also features the use of Sigma protocols, NIPoPoWs, Storage Rent, optional privacy features, and governance rights/responsibilities that are afforded to the miners.

Ergo is designed to be an adaptive blockchain. Any proposal that is made to adjust aspects of the blockchain must be voted on by the miners and mining pools - miners hold important governance powers on Ergo. For instance, there was a recent proposal (EIP27) to adjust the emission schedule of ERG tokens. Initially, the entire supply of ERG would have been mined within 8 years of the mainnet launch date. In order to ensure the time to properly develop the necessary crypto-economic security for the longevity of the blockchain, EIP27 was proposed to extend the mining rewards. EIP27 presented a reorganization of the emission schedule (without changing the initial supply), but in order for this proposal to pass, it required the mining community to pass the proposal with a 90% supermajority vote. Before this proposal passed, the mining pools were consulted, and for the most part, the pool administrators indicated how their respective pools would be voting. One pool (GetBlok), actually organized a vote for the miners on pool via NFT tokens on Ergo. This pool has also since developed subpooling for their miners, where they can mine other native tokens on the Ergo blockchain through smart contracts.

When looking at Bitcoin, one of the major concerns is that a large number of coins are permanently lost from circulation. This could be due to many reasons: a lost computer, inability to restore a wallet, death, etc. With Ergo, the Storage Rent protocol is an innovative feature that prevents coins from being permanently lost from circulation. For any UTXO box that does not execute a transaction within 4 years, there will be a small Storage Rent fee charged to that box. The fee for this feature is currently ~0.14 ERG (plus transaction fees). This unique protocol will continue to provide revenue for miners far into the future, while ensuring that none of the ERG supply is lost from circulation. In order to avoid this nominal fee, a wallet holder need only commit a transaction from that box within a four year period. For those who are interested in learning more about this fascinating aspect of Ergo, please read Ergo Explainer: Storage Rent.

As Ergo grows, there will be additional revenue streams for miners. Those who mine and maintain the network will also be to earn rewards from sidechains (NIPoPoWs will help facilitate this), bridge infrastructure, and Layer 2 infrastructure.

Although crypto markets have been trending downwards the last several months, Ergo development has only continued to grow. According to Stack, Ergo continually ranks amongst the highest in blockchain development activity. Thus far in 2022, there have been over 5700 commits on Ergo, compared to the industry average of 408. The blockchain is also witnessing a large influx of new developers, with over 180 developers having contributed to Ergo in the past year. This is due in part to the commitment by the Ergo Foundation to regularly organize and host ErgoHacks (the ecosystem’s hackathon).

ErgoPad is an IDO launchpad that is helping projects raise capital while assisting in promotion and development.
SigUSD is a non-custodial, over-collateralized, cyprot-backed stablecoin protocol. It never once lost its peg to USD during the market volatility of the last year, even while the value of ERG dropped from $22 to $1.80. If you are curious to know more about this powerful and innovative stablecoin, please visit the SigmaUSD website as well as this recent news article.

These are just two of the many dApps that are now functional in the Ergo ecosystem. For a complete overview of available dApps, please visit the Sigmaverse website.

How to Mine Ergo

If you are interested in mining Ergo, the Ergo Foundation has published several articles on how to participate in maintaining the network.

There is also a very active mining community on Telegram and interested parties can access that via the Ergo Mining channel. Once there, you can also access several resources, including suggested overclock settings for GPU’s.