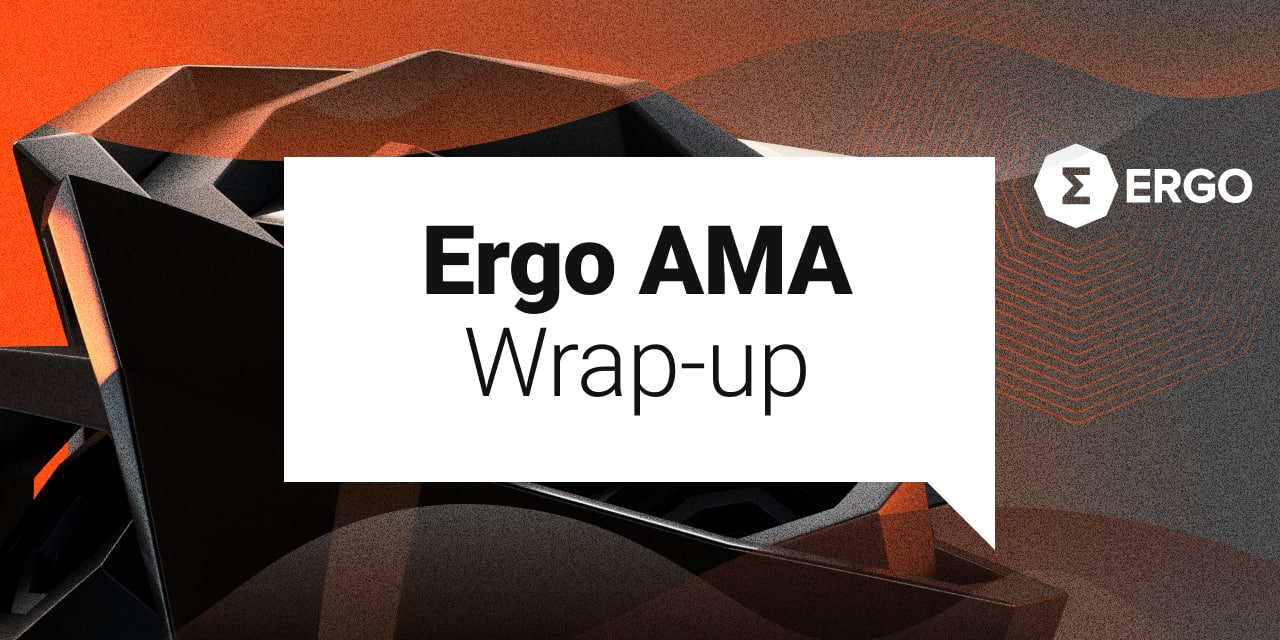 Dan began last week’s AMA with an update on the work he has been doing for the Ergo Foundation. He noted that it had been a very productive week and that the team had held a very exciting meeting with their education partner (a prominent accredited university). There has been a lot of progress made on this project and Dan is looking forward to revealing more as soon as there is a formal agreement in place. That being said, he was able to divulge some of the details of the education program. There will be two different education programs: one that is directed towards a beginner level and the other designated for those who are ready for a more advanced curriculum. Dan firmly believes that this kind of endeavor will help bring more people to the Ergo ecosystem. He understands the community is anxious to know as many details as possible, but he prefers to have paperwork signed before making public statements on the specifics.

For the next piece of news, Dan revealed that they are extremely close to announcing new exchange listings for Ergo. Several exchanges are in the process of completing their wallet integration, and once testing is completed they will be able to announce all the specifics.

Continuing with business developments, Dan reminded the community about his work to bring more commercial adoption and integration to the Ergo Platform. He has been talking to several partners and aggregators to bring them into the ecosystem and is hopeful to see more traction with these large projects in the near future.

Concluding his opening remarks, Dan revealed that he will be traveling to Dubai to participate in two conferences. The first one is Sigma Asia where he is presenting on the possible commercial applications of the metaverse. His activities will include serving on a panel as well as participating in several private meetings that he hopes will foster new opportunities. The second conference is ETHDubai where he said he is expecting some “fun things” to come out of that event. There may be an opportunity to have some fun guests on the AMA while at the conference, and the event should be a good opportunity for the Ergo ecosystem to get some exposure and attract new people.

Joseph Armeanio began his introductory remarks by informing the community that DeCo is now accepting new students. He informed the audience that Kushti has begun implementing EIP-27 on testnet, and they have been very active on the community Telegram channel discussing this process. In the next week, they expect to continue community discussions, this time focusing on the state of DeFi on top of Ergo.

Before fielding questions, Armeanio also informed the community about some important internal changes at the Ergo Foundation. They have relinquished the Ergo Platform Twitter account to Sigmanaut community members. They consist of prominent miners, developers, and other Ergonauts who are passionate about participating in the promotion and adoption of Ergo. As a result, the Ergo Foundation has shifted their marketing resources solely to work for the Foundation. Ergonauts can expect to see more community content from the Ergo Platform Twitter Account while the Ergo Foundation Twitter will focus more on the company’s work and development. In addition to this shift towards community involvement, Armeanio also indicated his weekly developer updates will start to focus more on the core overviews while giving application developers the opportunity to more directly highlight the work they are doing.

The following is a summary of questions posed by the audience during this AMA. Last week Dan and Armeanio answered questions on quantum computing, Layer 1 upgrades and Layer 2 solutions, the financial status of the Ergo Foundation, APY’s, oracle pool usage, development of commercial projects, and much more. Dan and Joseph's discussion on APY also led to a humorous and lengthy talk on how some APY’s are comparable to the risks of the drug trade.  To view the full AMA, please head over to Ergo’s Youtube channel: https://www.youtube.com/watch?v=4X9i4mLsfSk

Have the Ergo Dev team ever discussed quantum computing and planning resistance against it?

A lot of DeFi projects on Cardano are waiting for Layer 1 updates and Layer 2 solutions coming this summer. How ready is Ergo for similar types of projects?

What’s the status with the Ergo Foundation bank account? Curious because of the iOS wallet launch on AppStore.

Any thoughts on how we can create sustainable APY’s?

How will the increased use of Ergo Oracle pools affect the circulating supply of ERG?

Who are you ErgoHack 3 winners, Dan?

How does Ergo avoid centralization of mining and devices like ASICs?

What would be the next high impact change that will grow the Ergo network?

Could Ergo and Cardano have a hybrid PoW-PoS protocol? Or does that compromise security?

How would Ergo attract more commercial interest? Is there a current plan?