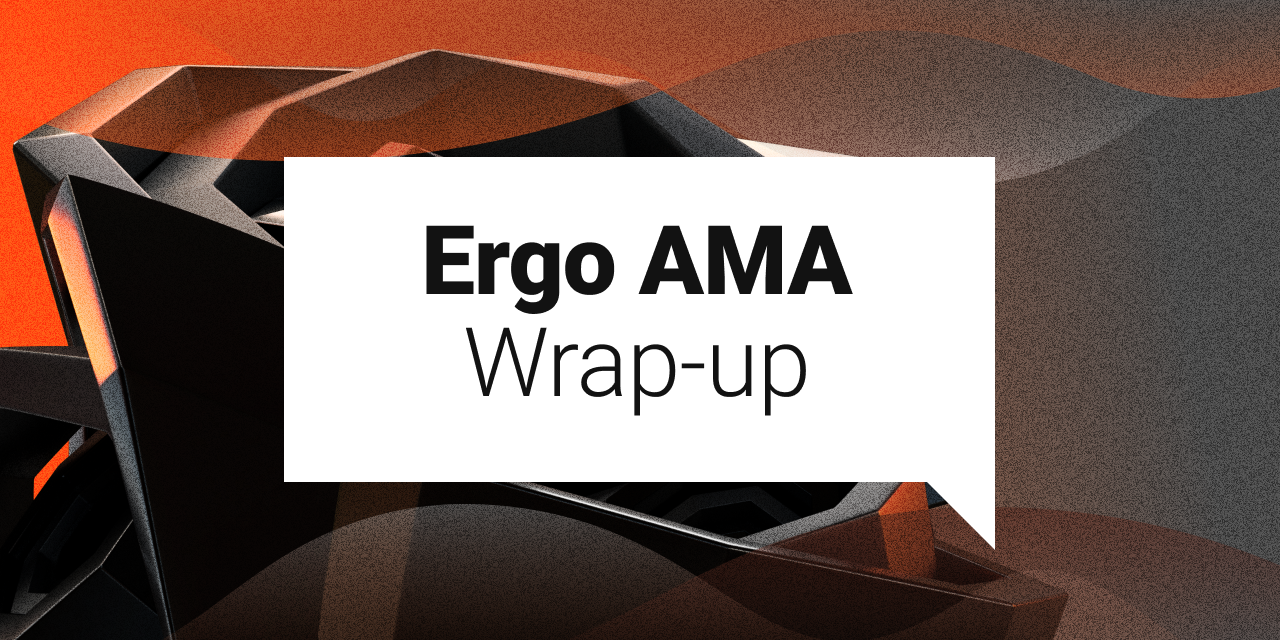 In his opening comments, Dan Friedman provided the latest updates on exchange listings. He reaffirmed that exchange listings (CEX and DEX) are definitely coming but that these things take time. With regards to CEXs, he explained that CEXs currently have a large backlog - some as long as a few months. Dan asked the community to remain patient and assured the audience that the team is working hard while talking with several exchanges. He reiterated that this will get sorted out and that Ergo will get listed on these exchanges.

Dan provided news that the Ergo Foundation is in talks with a prominent OTC desk. As with most of the team’s work, there is a process that has to be observed and respected. Engaging with this entity requires the Ergo Foundation to present a legal opinion. Following that, there is a review of Ergo’s ecosystem and how the coin was distributed. The OTC desk will want to understand how the coin was sold, if there was a pre-sale, and how the allocation was set. Dan mentioned that this work has been happening in the last week and it will bring increased traffic to the Ergo ecosystem.

With regards to partnerships, Dan indicated that there has been a lot of work going on behind the scenes. He discussed how Ergo’s tech is a big strength and that it is very attractive to some major players in blockchain. As a result of this, the team has been talking to some of these major players about utilizing Ergo for various use cases: research, rapid prototyping, side chains, scaling, smart contracts, etc. These are going to be “big, effective relationships” and the team is working hard to sort out what these partnerships will look like. Dan said as more information becomes available it will be shared with the community.

Dan concluded his opening comments with an update on the education products he has been working on. He discussed how the products that have been mentioned in previous AMAs have been further developed and that there are very good people joining the education initiative. Course designs will include curriculum focused on ErgoScript and Scala. Additionally, another suite of education products are being created for the beginner and intermediate level. These products will be geared towards business people (the average person) looking to integrate Ergo into their commercial and financial activities. Dan again emphasized how important these education products will be for onboarding new people and business in the Ergo ecosystem.

Joseph Armeanio greeted the community with news for those who may have had liquidity locked in the first version of SigUSD. The Ergo Foundation has reopened the UI and will be adding liquidity to the first variation of SigUSD. This will allow those who have had liquidity locked in that smart contract to swap their tokens with the Ergo Foundation’s liquidity. He advised community members to keep an eye out for this if they were affected by this issue.

Before jumping into questions, he reminded the community about the upcoming ErgoHack III and conveyed his excitement about seeing what projects will be proposed.

The following is a summary of questions posed by the audience during this AMA. Last week Dan and Joseph answered questions on transaction efficiency, commercial adoption, Ergo’s blockchain metrics, venture capital investors, user interface, and much more. They talk about the new Nautilus wallet and we learn that Dan’s Star Trek trivia is not to be challenged. To view the full AMA, please head over to Ergo’s Youtube channel: https://www.youtube.com/watch?v=bc_jwGbhvxY

Hello Dan, could you explain what was your role in the early days of Cardano and what you learned from that period?

What is your favorite Hackathon project?

Would Ergo be able to handle SundaeSwap volumes? We saw the Cardano blockchain being the bottleneck for transactions during the SundaeSwap launch. Could DEXs on Ergo experience the same?

Dan, did you already answer regarding the 1 million commercial users in the future? Profound and profane answers are more than welcome.

How to onboard venture capitalists when we have no tokens for sale? How do you see Ergo push towards future adoption?

I know that Ergo is a state of the art blockchain regarding backend. When do you think the UI will catch up as well?