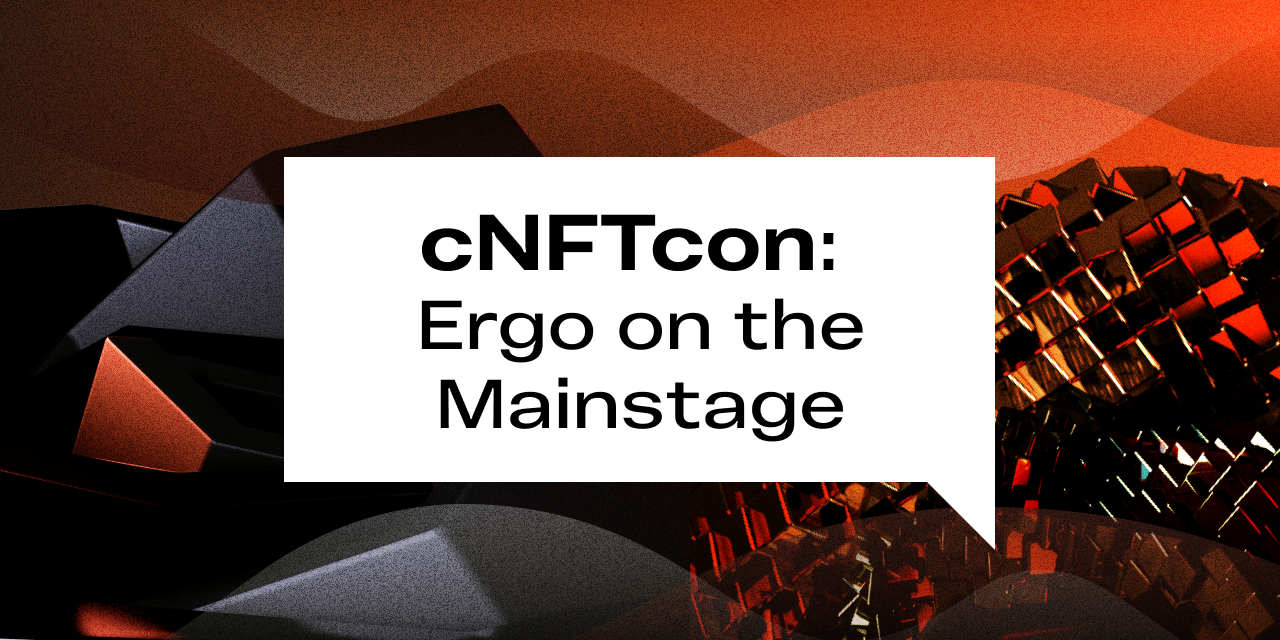 During the weekend of Oct. 7-10, the Cardano cNFT conference was held in Las Vegas at the Las Vegas Convention Center. This event was obviously a Cardano-centric conference, however projects from other blockchains (including Ergo) were in attendance promoting their respective work.

The cNFT conference offered a solid breadth of some of the projects that are building on the Cardano network. Attendees were treated to presentations and panel discussions by some of the biggest projects and names, including Charles Hoskinson. Ergo NFT’s were also well represented with one of the community's most popular NFT projects in attendance. The ERGnomes creator, known on Twitter as Foeniculum, was one of the booth presenters and had their art and ERGnome swag on full display for attendees. Ergo Foundation board member, Joseph Armeanio, and Ergo Foundation Advisor, Dan Friedman, were also in attendance and had set up booths representing Ergo and Dan’s company, zenGate Global.

During the scheduled events, Ergo and zenGate shared a mainstage slot and took the opportunity to present information with the audience about the two projects. Sam Lambert (representing zenGate) elaborated on how zenGate Global is designing a cross-chain commercial application on Ergo and Cardano, with a particular focus on building out a commodities DEX. zenGate will provide access to physical assets through NFT’s and in turn, token holders will be able to provide financing to businesses on their platform. At present, zenGate has finished the UX build and has partnered with a company in Thailand to begin testing. Lambert shared that interested parties can expect a full launch in about a year.

Armeanio took the time to explain some of the principles behind Ergo and why the platform is attractive for developers. He highlighted how Ergo’s strong commitment to open source development paves the way for a stronger blockchain platform. Citing the evolution of Ethereum, he noted that one of its greatest strengths was the adoption of open source code and tool kits for developers. The barrier for entry for Solidity lowered so that people with ideas could build on Ethereum. With Ergo’s eUTXO model and unique technological features, Armeanio talked about how he is looking forward to seeing Ergo “cookbooks” for smart contracts, scaling, and other developer tools. He encouraged new developers to take a look at the Ergo Platform and the regular hackathons that are hosted by the Ergo Foundation. In closing, he talked about the strength of the Ergo community and how core developers are constantly working with the community to audit and review open source work. Armeanio left the audience with the following thought on Ergo and open source development: “if you build public infrastructure, everyone benefits.”