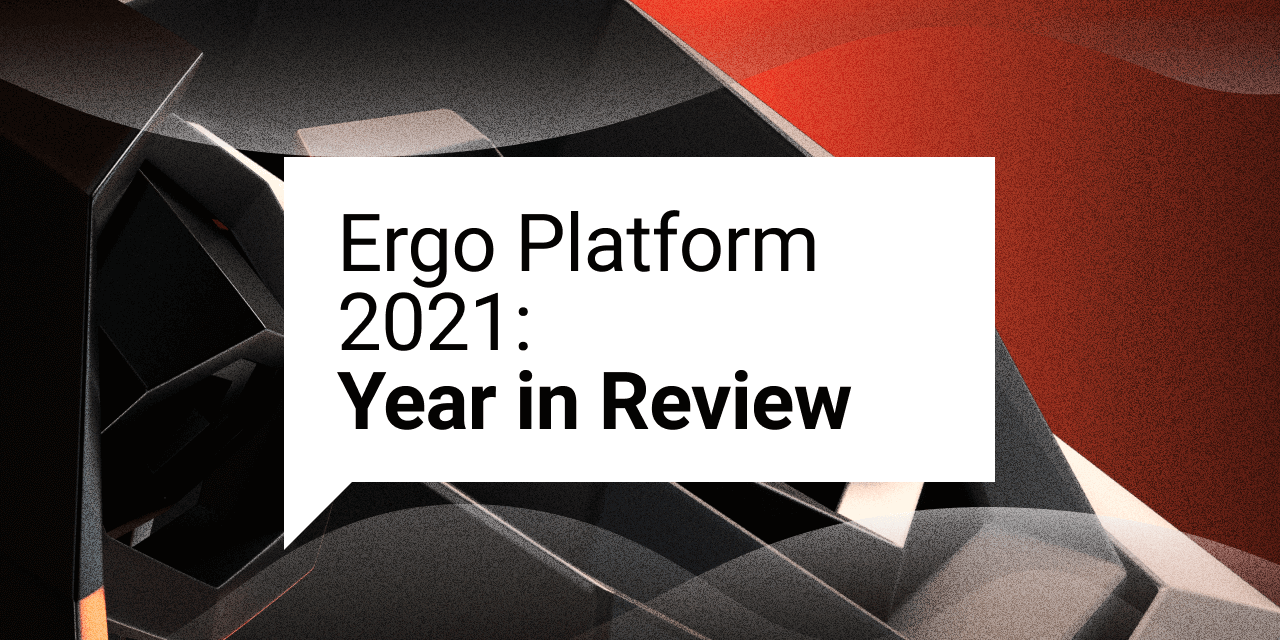 As the world tries to recover from the effects of Covid and the different stages of lockdown restrictions, cryptocurrencies continue on a path to mainstream adoption. The larger conversation in the industry has been regulation and how to successfully integrate blockchain technology into world economies as a whole.

Despite innovations in crypto, particularly in decentralized finance, conflicting regulations and lack of a proper framework have been huge drawbacks in the past. In 2021, we saw legislators and regulatory bodies start to work closely with industry leaders in creating a structure for the steadily growing asset.

Now over two years old, Ergo is a community-driven project. The platform aims to fulfill the key goals of decentralization and the Ergo Manifesto while continuing to breed innovation amongst developers and within the community. In 2021, Ergo increased partnerships within the DeFi sector, hosted new hackathons that inspired new dApps, and saw the community grow in size.

For most of the year, Ergo saw significant growth in market capitalization. In 2021, Ergo’s native token (ERG) reached a new all-time high of $19.50 (nearly cracking the top 100 tokens on Coinmarketcap), making it one of the fastest growing Defi projects in the blockchain industry. At the time of writing, Ergo has a market capitalization of more than $256 million with the total supply of approximately 97 million currently set to be fully mined within the next six years.

In November, Ergo introduced a new plan for a soft fork that will alter the emission schedule of ERG. It proposes an increase to the years of emission (up to 2057) while maintaining the same capped supply. For more information on this proposal and the upcoming vote, please see the following: https://www.ergoforum.org/t/emission-soft-fork-proposal/2996

After months of development, SigUSD was launched in February. The stablecoin was one of the first major dApps to be deployed on the Ergo system. SigUSD is an algorithmic crypto-backed stablecoin that uses the AgeUSD protocol. Users can mint either SigUSD or SigRSV where both tokens are backed by ERG reserves.

It is a non-custodial, decentralized exchange that will run on top of the Ergo and Cardano blockchains. ErgoDEX supports swap features as well as an automated market maker (AMM). Order book trading systems will also be developed as the DEX works towards building a secure transfer of liquidity between the Ergo and Cardano networks.

In August, ErgoDEX released a beta version with swapping options and liquidity pools. Recently, the team behind ErgoDEX announced that the exchange already has approximately $1 million in TVL (total value locked).

In March, Ergo introduced a new privacy-based tool known as the ErgoMixer. ErgoMixer is a non-custodial mixer where two or more parties can exchange crypto without revealing private details - such as their wallet balance. In a sense, the dApp works like a physical cash wallet in a grocery store where a buyer can pay for items while concealing their balance.

In November, the team behind ErgoAuctions announced an updated version of their Ergo Auction House. The auction house is an NFT marketplace for artworks, including audio and visual content by artists and content creators in the blockchain space. The upgrade brought royalty features to artists and an option to list auctions in other tokens besides ERG.

Ergo Payment Portal is a dApp built to facilitate payments in ERG for small businesses. In this dApp, sellers can create a direct URL for their product and set a price for it. Typically, the Payment Portal URL will include the product, the price, the wallet address and the currency.

These are just a few of the unique dApps available on Ergo. For a comprehensive overview of the ecosystem, please visit Sigmaverse.

In June 2021, Ergo hosted its first-ever hackathon—ERGOHACK. The event featured the presentation of potentially new solutions for the ecosystem, including tokenization schemes, visual tools for constructing multi signatures, and NFT tools. There were six presenting groups in total and the grand prize was $5000 for first place.

The second hackathon—ERGOHACK II was held in October. The focus was social transformation with the goal of implementing this theme into tools and dApps using ErgoScript and Ergo’s UTXO based smart contracts.

A third hackathon—ERGOHACK III is scheduled for February 2022. ERGOHACK III will focus on privacy and security and applications will be open from January 4 -31. Like previous iterations of ErgoHack, the goal is to promote innovation and the creation of tools and dApps for the Ergo ecosystem.

Throughout the year, Ergo showed a commitment to expanding the community and mainstream adoption through several partnerships. Some of these partnerships included:

Ergo was listed on several new exchanges in 2021, including Kucoin, Changelly, Changelly pro, and Bitcoin.com, to name a few. In addition to the work being done by Kairon Labs, Dan Friedman has indicated that the Ergo community can expect to see more exchanges support Ergo in 2022. In the last AMA of 2021, he indicated that the team is in discussion with several Tier 1 and Tier 2 exchanges and that more details will be available as soon as paperwork is finalized. In addition to these exchanges, Dan also revealed that developers are building bridges so that Ergo can be integrated and listed on several prominent DEXs.

2021 was a big year for Ergo and there are a lot of things in the pipeline to ensure that 2022 will be even busier. The Ergo Foundation officially incorporated in Singapore this year, opening the doors to securing new partnerships. With the appointment of Dan Friedman as an advisor to the Ergo Foundation Board, Ergo has made a strong commitment to taking the necessary steps to promote and market the platform into the next phase of its development.

Expect to see a rebranding of Ergo’s website in the New Year and keep an eye out for announcements regarding new partnerships and developments. Our community is one of our strongest identifying features and we always look forward to hearing your feedback.

Happy New Year! We look forward to continuing to build the future of blockchain with you as we enter 2022.