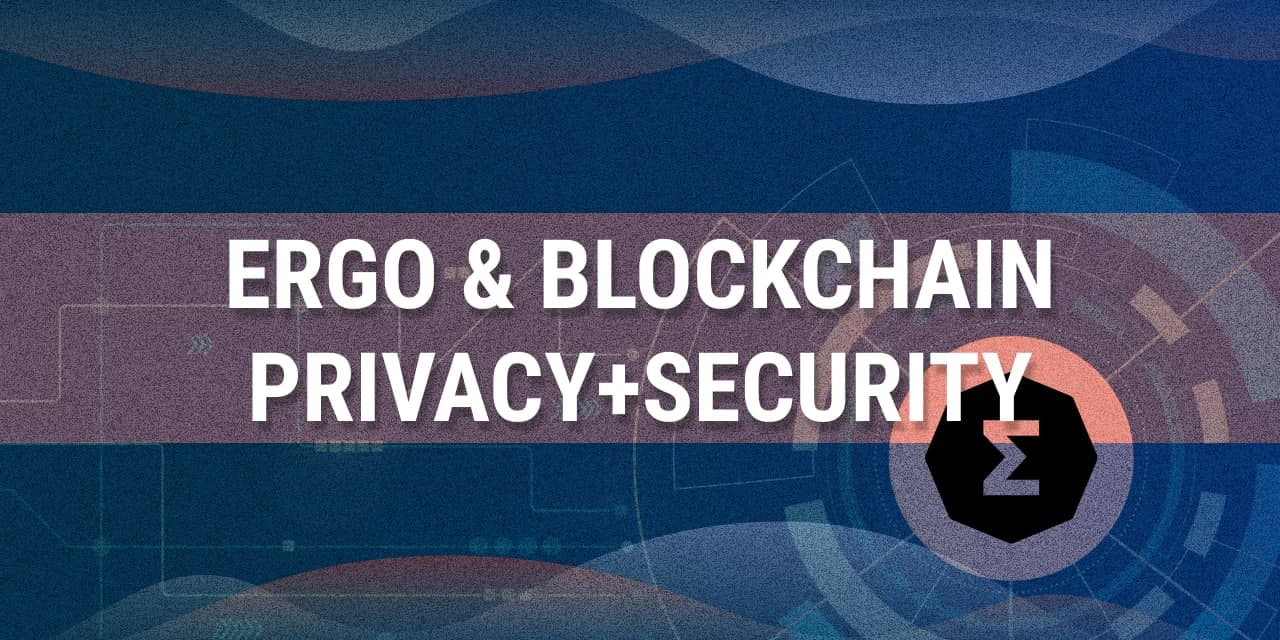 For this third article in the Ergo & Blockchain series, we will explore the various arguments posited on the privacy and security of different cryptocurrencies.

Cryptocurrency and DeFi ecosystems are growing at a fast pace and there are differing views on the benefits of blockchain. It should be noted that a self-proclaimed decentralized cryptocurrency, where ten or twenty validators control 50% of the network, is not necessarily decentralized or immutable. The search for efficiency, at the expense of decentralization, has sometimes been a higher priority among blockchain projects. Facing the risk of becoming centralized databases, it seems that cryptocurrencies are under the threat of surveillance and censorship.

History has shown that centralization will not create an alternative way of finance. As we have learned with the advent of smart contracts, cryptocurrencies are more than just mere tools for faster finance. For a deeper understanding of how Ergo views the spirit and application of cryptocurrencies, please see the Ergo Manifesto.

Bitcoin was created as an alternative to fiat currencies and centralized structures by offering a decentralized way of data storage and authentication. Cryptocurrencies have erased the need for an intermediary party and changed how we perceive finance, ownership and transparency. However, this is not necessarily the case when one analyzes the tokenomics of certain cryptocurrencies.

Some smart contract mining models, like SmartPools or Logarithmic Space Mining, can increase the decentralization of mining power. These types of models help to prevent 51% attacks and increase security. The number of mining pools that support Ergo has increased by over twenty with two of those operating as community launched pools.

In the case of centralized exchanges, the saying goes: not your keys, not your coins. Every person needs to own a non-custodial wallet for the safety of their funds. Your seed phrase is unique to you and your funds are under your control and immune to exchange hacks. Additionally, non-custodial wallets allow users access to dApps so that they can benefit from secure interactions.

Banks, governments, investment firms, etc, hold a great amount of power over individuals. When individuals use centralized database services for storage and authentication services, their accessibility to that data becomes at risk. Censorship comes in various forms, from a simple exemption to certain advantages (insider sources, special offers), to full censorship such as being banned access to global markets.

This is not how a free-market economy should be working. The state has prioritized institutions over individuals and created unfair competition. This leads to irresponsible risk-taking by institutions and a more fragile economy. Nature does not favor the disadvantaged and the average person stands to experience the most harm from market crashes - as there are often no bail-outs for the people.

Cryptocurrencies provide a solution (although not perfect) and an opposition to the central accumulation of governance powers. The relationship between individuals and authorities will be undergoing a social transition in this new context of power. What once was seen as a Black Box is now tokenized and decentralized. The use of cryptography has introduced zero-knowledge authenticity which is accessible and secure for use by many. For the first time, people do not have to rely on a centralized database; although the power of centralized databases will not be quick to dissipate.

Now that we see that cryptocurrencies are (supposed to) offer opportunities for ordinary people, we should explore under what conditions that becomes true. When Bitcoin launched, it was designed as a decentralized and immutable value of exchange. The idea of privacy was not a priority over the security of the system. Bitcoin provides pseudo-anonymity, as the addresses can not be linked to an individual directly, however, the addresses can be seen on-chain. Here is an explanation of the “New Privacy Model” from Bitcoin’s Whitepaper.

This was a huge leap for privacy but still an early version of digital anonymity.

With blockchain, hierarchical layers of privacy can be created to select which data can be shared with whom. In this sense, blockchains are perfectly suited for the security needs of businesses and other institutions. Inevitably, this will lead to some resistance from centralized institutions because gatekeepers will likely not want to lose their powers to peer-to-peer networks.

Ergo believes that the future lies in regaining power for the average person. We need to learn what tools are readily available and what tools we as a society are in danger of losing. A tokenized revolution may not be fast and steady though, as the people in control will undoubtedly dislike the redistribution of their current power structure.

Therefore, it is important to understand and analyse one’s own actions. If cryptocurrencies become centralized or if the users stop using blockchains and turn to centralized databases, the model would be no different than the historical constructs that have led us to this moment. We recommend everyone to be aware of the network’s token and hash-rate distribution, have a non-custodial crypto wallet and always do your own research.

For the next article in this series, we will dive into blockchain technology and innovation. If you are curious about the previous articles in the Ergo & Blockchain series, please see the following: